I never realized how many pieces of  heriloom silver I have until I started this party.  I thought most of my silver posts would draw from my monsterous flea market stash but I really haven't even delved into my found silver .....as I search for post topics each week I keep discovering family items...and there's so much more. 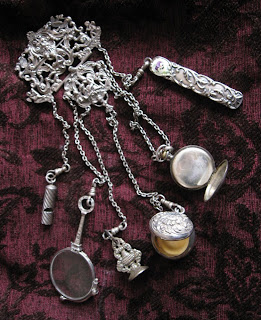 This week I found one of my most prized possessions...my Great Grandmother's Sterling Silver Chatelaine..her private tool belt, if you will, however no lady would ever refer to anything she wears as a mere tool belt. 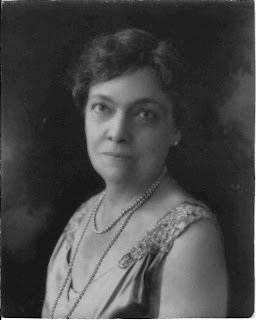 Sarah Elnora Jarvis Goodman
Being a lady of society her tools were quite different than what was traditionally found on late 19th century women's chatelaine..she had ready at her side, a pill box, a pocket watch, enamel inlaid silver toothpick holder(as I understand pansies were her favorite flower), a sterling seal,reading glasses and of course a whistle ...not really sure I know what that was for. I believe there was also a hanging vinaigrette (you know, should one suddenly succumb to the vapors) not sure what hung on the last fob. 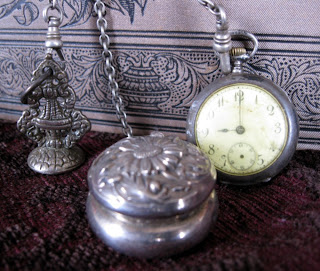 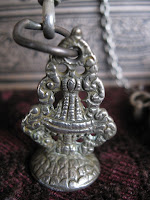 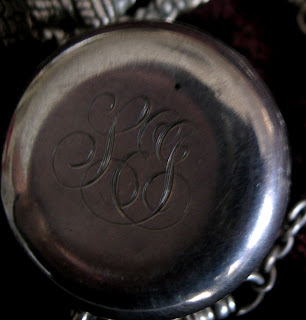 here's Wikipedia's description of chatelaine.....
Chatelaine is a decorative belt hook or clasp worn at the waist with a series of chains suspended from it. Each chain is mounted with a useful household appendage such as scissors, thimble, watch, key, vinaigrette, household seal, etc.Chatelaines were worn by many housekeepers in the 19th century. They were also worn by Anglo Saxon women, as seen from the burial record.The name chatelaine derives from the same term used to mean the female owner, or husband of the owner, of a large house. The chatelaine was designed to have all the tools necessary for the woman of the household to sort out any problem she may encounter in her day, like a fraying curtain. 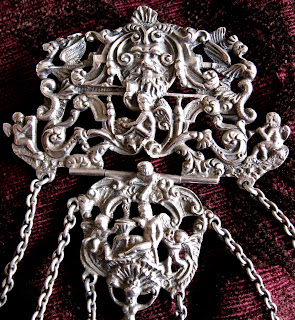 I am so enamored with this gorgeous piece....there are 7 cherubs and dragons or gargoyles (I love gargoyles) on either side and the old North Wind man beautifully crafted in to this piece...it's really a treasure...hmmm makes me wonder what I would hang from mine...a cell phone, memory stick, lip gloss, shoprite card, so not glamorous...what would you hang from yours? 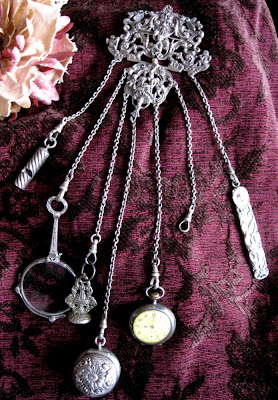 The count down to the final Silver Sunday is upon us! So here's a few thoughts to think about for the next week.  I will be posting the giveaway on the final Sunday...to earn chances here's the scoop.

1.You will receive  1 chance for every week you participated.

2. Adding to that, 2 more chances if you've become a follower.

3....and wait there's more...you will receive 1 more chance for every comment you've left throughout the party until it's final day on Feb. 7th.
....boy I'm long winded this week,  one more final announcement....there will be a season 2 of Silver Sunday!
This party is just way tooo much fun to stop! So I will be doing The Second Silver Sunday a monthly party on the second Sunday of every month......thanks for coming see you next week!

Thanks for taking the time to leave a comment.....